I’d never heard of Bartolo Mascarello two years ago, and I was definitely not an Italian wine fanatic. Perhaps I never had a “good” one. By “good”, I mean something I liked and that held my interest. However, a recent discovery of Bartolo Mascarello Langhe Nebbiolo at a wine shop enthralled me and inspired me to embark on an expedition to Piedmont. Just last month, I was there (for the first time) in my long quest to learn everything about Nebbiolo and, most importantly, to demystify one of the world’s most expensive Italian wines produced by Maria Teresa Mascarello.

Located in the heart of Barolo, the office of Cantina Bartolo Mascarello is hardly visible on the street. The rusted sign next to the entrance is a probably a reminder that the Cantina wants to keep a low profile.

Maria took over the Cantina after her father Bartolo Mascarello, legendary Barolo producer, passed away in 2005. She’s currently running the firm without a cellphone, a computer and a website. She called herself “asocial” and yet her wine is making an ever-increasing noise among wine drinkers the world over.

Maria’s tenacious defense of her father’s traditional winemaking philosophies and ancient Barolo methods, which is still in practice today, is what makes her wine so standout in the crowd. Her version of authentic Barolo is to keep the wine’s purity and transparency at its core. She’s changed nothing of her father’s modus operandi and refused to be interfered by the modern practice of of vinifying and bottling single vineyards. The best expression of her traditionally made Barolo is an assemblage of Nebbiolo from four different vineyards across the zone - Canubbi, San Lorenzo, Rue and Rocche in the commune of La Morra. (Blending was a practice that was largely abandoned once single-vineyard Barolos became the rage starting in the early 1960s. –Vinous)

“We don’t experiment, and we’re not interested in the crus nor the Burgundian model,” said Alan Manley who works for Maria and manages the office. “We’re keeping the ancient way of making Barolo. There’s no rule, no formula and no recipe. The wine is what nature gives them.”

“What we put in the basket must be PERFECT,” he emphasized. “All grapes must be impeccably selected, nothing into waste. What goes into the tank needs to be clean, fresh and mature.” 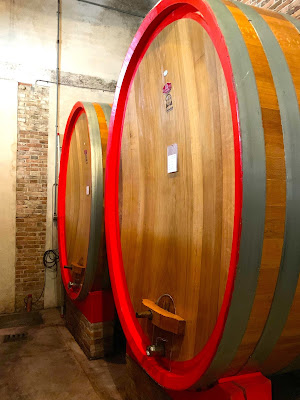 The wines are then fermented in concrete for 15-20 days, without the aid of temperature control or selected yeasts.  Next, they are aged in medium and large Slavonian oak barrels, with no barrique, for 3 years before being released.

Back then, Bartolo was so against the idea of using barrique that he deliberately designed a label for the 1999 Barolo “No Barriques No Berlusconi” to depict the viciousness of both barriques and former Italian Prime Minister Berlusconi. 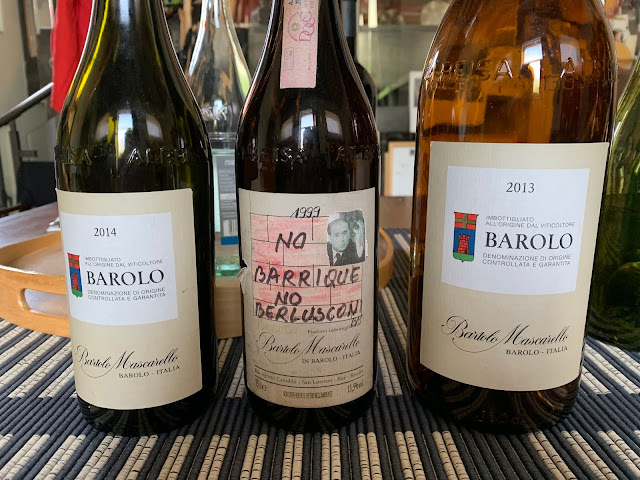 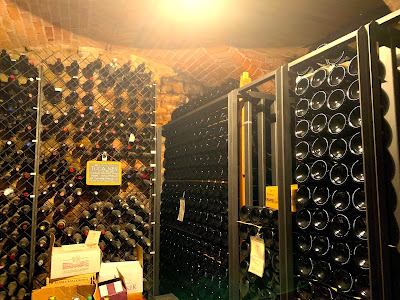 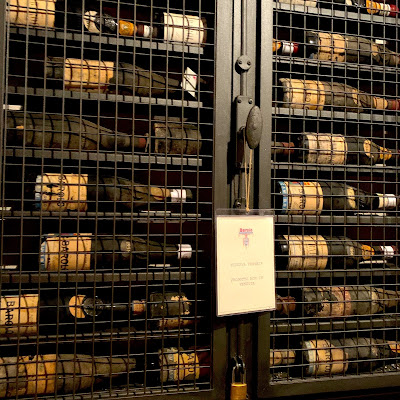 I was given a tour of the cellar and wine library where the oldest vintages and labels, including 1929 and 1944 Riserva were stored. Bartolo added his personal drawing to the labels in 1982, which was the first vintage made without his father Giulio who died in 1981. Maria found over 500 hand drawing labels by Bartolo after he passed away.

This year marks a century of winemaking for Cantina Mascarello Bartolo. It has expanded their vineyard by only one hectare over the course of a hundred years. With the existing 5 hectares of land in Piedmond the Cantina produces only 35000 bottles a year, half of which is Barolo while Langhe Nebbiolo accounts for only 2000-4000 bottles. This explains why it is so hard to find in the market. 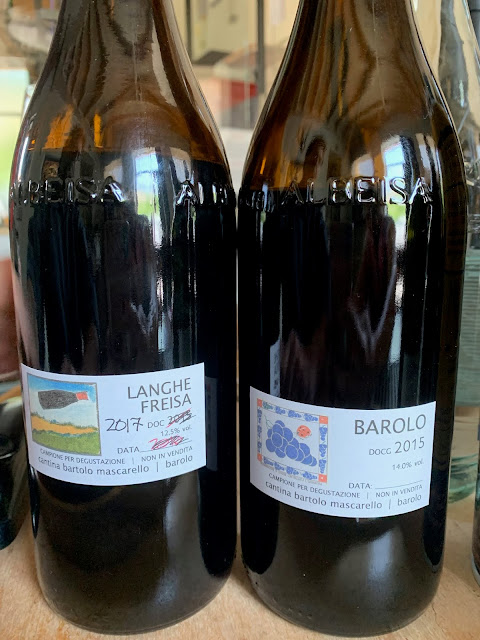 Bartolo Mascarello Langhe Freisa 2017: Young, sweet with a minimum degree of gentle fizziness. It was so delightful and fresh that offered a promising possibility to evolve for the better, for a decade or more.

Bartolo Mascarello Barolo 2015: Concentrated, refined and classically styled. A very good typical Barolo with a little shy red berries emerging as I sipped along. Silky textures with the slow-release richness of fruit finely crafted and delicious!

What’s available at our store:

The 2011 Barolo is a very expressive wine with more determination and muscle than you usually get in the wines of Bartolo Mascarello. The bouquet opens to plush flavors of red fruit and cherry with grilled herb, tobacco and mineral delineation. Its structure is yielding and round and the finish is ripe with soft fruit flavors. Make no mistake, it doles out complexity and an ethereal sense of balsam herb, cola and licorice that is the hallmark of this historic estate with a tiny garage winery in the town of Barolo. The alcohol reading here is 14.5% compared to 14% in the 2010 vintage. The Bartolo Mascarello winery continues faithfully in its long-standing promise of delivering classic expressions of Nebbiolo in its purest form. Among Maria Teresa Mascarello's new releases, I was absolutely smitten by her work with the easy-drinking Freisa grape. -RP

Freshly cut flowers, mint, raspberry and red stone fruits all lift from the glass in the Maria-Theresa Mascarello's 2012 Barolo. Silky, open-knit and gracious, the 2012 is surprisingly delicious today. This is a decidedly mid-weight, approachable Barolo that is already quite open and delicious. Best of all, the 2012 won't need years to come together. Mascarello fans should buy the 2012 to drink over the near and medium-term, while some of the more structured vintages age in the cellar. A model of grace and finesse, the 2012 is striking in its beauty, even if it clearly doesn't have the depth or multi-dimensional personality of the very best years. -AG

Mascarello’s 2008 Barolo is a wine of extraordinary elegance. A sweet, open bouquet leads to dark red fruit, mint, spices and licorice in this pretty, nuanced Barolo. The 2008 is all about detail and understated finesse. It boasts breathtaking purity in its fruit and fabulous overall balance. A textured, finely-knit finish leaves a lasting impression. The 2008 is very classic in style. It will require considerable patience, despite its deceptively medium-bodied structure. This is another dazzling wine from Maria-Theresa Mascarello. -AG98 RP96