Last month, I was invited to an exclusive Georgian wine dinner. Throughout the soiree political talk was somehow unavoidable. At one point I was convinced that the pleasurable and the political are intertwined, and that's the true joy of wine tasting! (Tasting notes are boring and it doesn't have to be de rigueur at the dining table).

Amid the tasting of Chateau Mukhrani – famous for its white wine, some local patrons were offended when the winemaker unintentionally made such comment, “I’m happy to see Georgian wine has become so popular here in China!”

In an attempt to defend the autonomy of HK the local guests immediately corrected him, insisting that HK is not China.

Not everyone is familiar and sympathetic with HK's political complication, which is comparable to Georgia's own. I couldn't help but wondered if the Georgians think alike about their national identity - due to their vaguely defined past and the fact that Georgia is still politically and culturally influenced by the Russians since the collapse of the Soviet Union and the Act of Independence. (If you are not from a former Soviet country, I highly doubt you know where Georgia is located on the world map, unless Russia or Joseph Stalin is mentioned.)

Despite Georgia’s endless effort to become an independent democracy, it still has to deal with the lingering shadow of the USSR. Given the current geopolitical condition with South Assetia (Tskhinvali) and Abkhazia declaring autonomy from Georgia with Russia’s backing, Russia’s economic and social involvement in Georgia is prominent.

As Tim McKirdy (Vinepair) put it, “To this day, relations remain complicated. And the story of Georgian identity is, in many ways, best understood through its wine.”

“During Soviet times, when qvevri wines were not resected or allowed, we lost much of our acquired wisdom about qvevri,” said historian and oenologist Giorgi Barisashvili explained. “Bad habits were formed because quantity mattered more than quality.” He is glad that now many families and old people in the villages continue and improve this tradition that’s respectful of the soil and grapes. (Source: Tasting Georgia) 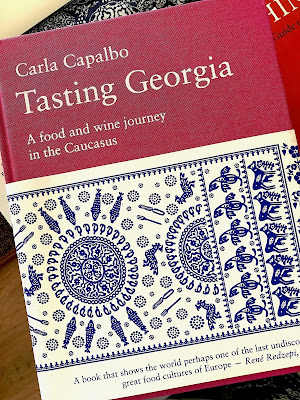 Now qvevri wine has revived and qvevri has become Georgia’s national symbol. It has a voice as it has scored an astonishing success in the UK and China. However, it accounts at less than 2% of all the wine officially made in Georgia.

According to the Georgian National Wine Agency, Georgian wine export were up 27 percent as of May 2018. Georgia exported 31.5 million bottles of wine to 46 countries in the first five months of 2018. Ironically, Russia is still de facto the biggest customer, lapping up about 60% of Georgia’s total wine exports by volume, reported Simon Wolf, author of The Orange Revolution.

In a wine article in “The World of Fine World,” Miguel Hudin reported that non-dry wines such as Kindzmarauli and Kvanchkara are dominating the market to accommodate Russian drinkers while others (made in tanks and barrels) made up almost 30% of production every year.

Regardless, I have been very impressed with the quality and style of the new qvevri wine I sampled lately. Native Georgian grapes, such as Saperavi and Rkatsiteli, of those wines have achieved their true potentials through modern qvevri method and magically transform from obscurity into clarity.

The Morning Claret: The real story behind Georgian wine